When you’re searching a set of version-controlled files for a string with grep, particularly if it’s a recursive search, it can get very annoying to be presented with swathes of results from the internals of the hidden version control directories like .svn or .git, or include metadata you’re unlikely to have wanted in files like .gitmodules.

GNU grep uses an environment variable named GREP_OPTIONS to define a set of options that are always applied to every call to grep. This comes in handy when exported in your .bashrc file to set a “standard” grep environment for your interactive shell. Here’s an example of a definition of GREP_OPTIONS that excludes a lot of patterns which you’d very rarely if ever want to search with grep:

Note that --exclude-dir is a relatively recent addition to the options for GNU grep, but it should only be missing on very legacy GNU/Linux machines by now. If you want to keep your .bashrc file compatible, you could apply a little extra hackery to make sure the option is available before you set it up to be used:

Similarly, you can ignore single files with --exclude. There’s also --exclude-from=FILE if your list of excluded patterns starts getting too long.

Other useful options available in GNU grep that you might wish to add to this environment variable include:

If you don’t want to use GREP_OPTIONS, you could instead simply set up an alias:

You may actually prefer this method as it’s essentially functionally equivalent, but if you do it this way, when you want to call grep without your standard set of options, you only have to prepend a backslash to its call:

Commenter Andy Pearce also points out that using this method can avoid some build problems where GREP_OPTIONS would interfere.

Of course, you could solve a lot of these problems simply by using ack … but that’s another post.

This entry is part 3 of 7 in the series Unix as IDE.

The text editor is the core tool for any programmer, which is why choice of editor evokes such tongue-in-cheek zealotry in debate among programmers. Unix is the operating system most strongly linked with two enduring favourites, Emacs and Vi, and their modern versions in GNU Emacs and Vim, two editors with very different editing philosophies but comparable power.

Being a Vim heretic myself, here I’ll discuss the indispensable features of Vim for programming, and in particular the use of shell tools called from within Vim to complement the editor’s built-in functionality. Some of the principles discussed here will be applicable to those using Emacs as well, but probably not for underpowered editors like Nano.

This will be a very general survey, as Vim’s toolset for programmers is enormous, and it’ll still end up being quite long. I’ll focus on the essentials and the things I feel are most helpful, and try to provide links to articles with a more comprehensive treatment of the topic. Don’t forget that Vim’s :help has surprised many people new to the editor with its high quality and usefulness.

Vim has built-in settings to adjust its behaviour, in particular its syntax highlighting, based on the filetype being loaded, which it happily detects and generally does a good job at doing so. In particular, this allows you to set an indenting style conformant with the way a particular language is usually written. This should be one of the first things in your .vimrc file.

Even if you’re just working with a 16-color terminal, just include the following in your .vimrc if you’re not already:

The colorschemes with a default 16-color terminal are not pretty largely by necessity, but they do the job, and for most languages syntax definition files are available that work very well. There’s a tremendous array of colorschemes available, and it’s not hard to tweak them to suit or even to write your own. Using a 256-color terminal or gVim will give you more options. Good syntax highlighting files will show you definite syntax errors with a glaring red background.

To turn line numbers on if you use them a lot in your traditional IDE:

You might like to try this as well, if you have at least Vim 7.3 and are keen to try numbering lines relative to the current line rather than absolutely:

Vim works very well with the output from the ctags utility. This allows you to search quickly for all uses of a particular identifier throughout the project, or to navigate straight to the declaration of a variable from one of its uses, regardless of whether it’s in the same file. For large C projects in multiple files this can save huge amounts of otherwise wasted time, and is probably Vim’s best answer to similar features in mainstream IDEs.

You can run :!ctags -R on the root directory of projects in many popular languages to generate a tags file filled with definitions and locations for identifiers throughout your project. Once a tags file for your project is available, you can search for uses of an appropriate tag throughout the project like so:

The commands :tn and :tp will allow you to iterate through successive uses of the tag elsewhere in the project. The built-in tags functionality for this already covers most of the bases you’ll probably need, but for features such as a tag list window, you could try installing the very popular Taglist plugin. Tim Pope’s Unimpaired plugin also contains a couple of useful relevant mappings.

Until 2017, there were three major methods of calling external programs during a Vim session:

Since 2017, Vim 8.x now includes a :terminal command to bring up a terminal emulator buffer in a window. This seems to work better than previous plugin-based attempts at doing this, such as Conque. For the moment I still strongly recommend using one of the older methods, all of which also work in other vi-type editors.

Checking syntax or compiling with an external program call (e.g. perl -c, gcc) is one of the calls that’s good to make from within the editor using :! commands. If you were editing a Perl file, you could run this like so:

The % symbol is shorthand for the file loaded in the current buffer. Running this prints the output of the command, if any, below the command line. If you wanted to call this check often, you could perhaps map it as a command, or even a key combination in your .vimrc file. In this case, we define a command :PerlLint which can be called from normal mode with \l:

For a lot of languages there’s an even better way to do this, though, which allows us to capitalise on Vim’s built-in quickfix window. We can do this by setting an appropriate makeprg for the filetype, in this case including a module that provides us with output that Vim can use for its quicklist, and a definition for its two formats:

You may need to install this module first via CPAN, or the Debian package libvi-quickfix-perl. This done, you can type :make after saving the file to check its syntax, and if errors are found, you can open the quicklist window with :copen to inspect the errors, and :cn and :cp to jump to them within the buffer.

This also works for output from gcc, and pretty much any other compiler syntax checker that you might want to use that includes filenames, line numbers, and error strings in its error output. It’s even possible to do this with web-focused languages like PHP, and for tools like JSLint for JavaScript. There’s also an excellent plugin named Syntastic that does something similar.

Reading output from other commands

You can use :r! to call commands and paste their output directly into the buffer with which you’re working. For example, to pull a quick directory listing for the current folder into the buffer, you could type:

This doesn’t just work for commands, of course; you can simply read in other files this way with just :r, like public keys or your own custom boilerplate:

Filtering output through other commands

You can extend this to actually filter text in the buffer through external commands, perhaps selected by a range or visual mode, and replace it with the command’s output. While Vim’s visual block mode is great for working with columnar data, it’s very often helpful to bust out tools like column, cut, sort, or awk.

For example, you could sort the entire file in reverse by the second column by typing:

You could print only the third column of some selected text where the line matches the pattern /vim/ with:

You could arrange keywords from lines 1 to 10 in nicely formatted columns like:

Really any kind of text filter or command can be manipulated like this in Vim, a simple interoperability feature that expands what the editor can do by an order of magnitude. It effectively makes the Vim buffer into a text stream, which is a language that all of these classic tools speak.

There is a lot more detail on this in my “Shell from Vi” post.

It’s worth noting that for really common operations like sorting and searching, Vim has built-in methods in :sort and :grep, which can be helpful if you’re stuck using Vim on Windows, but don’t have nearly the adaptability of shell calls.

Vim has a diffing mode, vimdiff, which allows you to not only view the differences between different versions of a file, but also to resolve conflicts via a three-way merge and to replace differences to and fro with commands like :diffput and :diffget for ranges of text. You can call vimdiff from the command line directly with at least two files to compare like so: 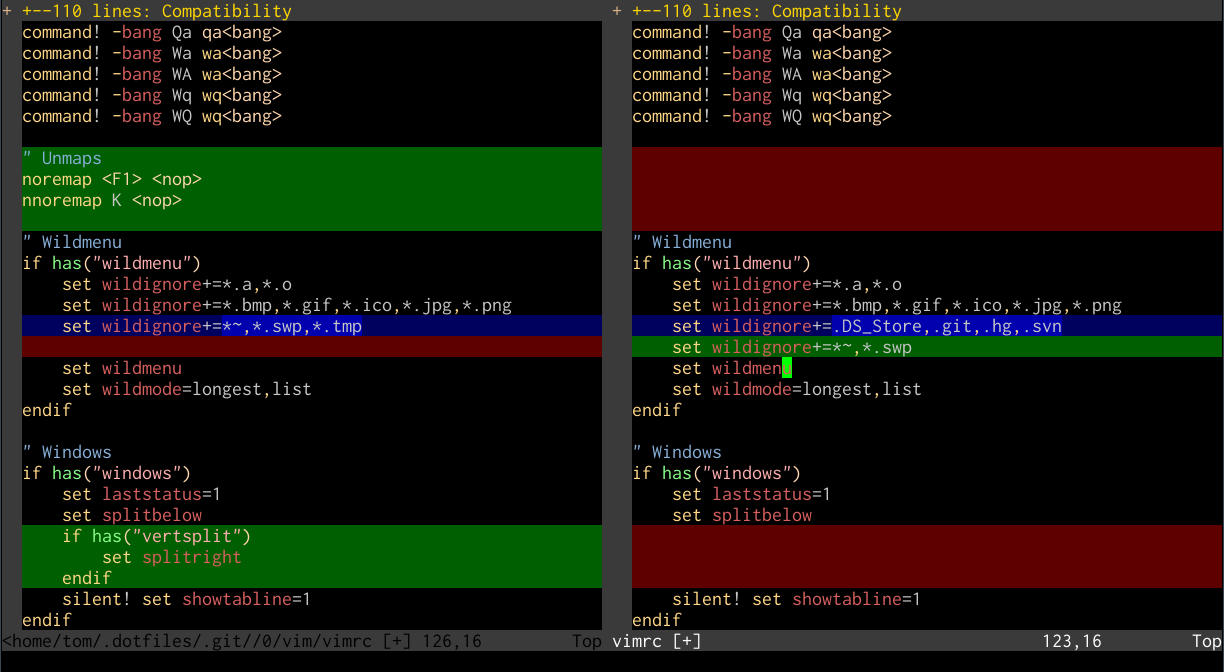 You can call version control methods directly from within Vim, which is probably all you need most of the time. It’s useful to remember here that % is always a shortcut for the buffer’s current file:

Recently a clear winner for Git functionality with Vim has come up with Tim Pope’s Fugitive, which I highly recommend to anyone doing Git development with Vim. There’ll be a more comprehensive treatment of version control’s basis and history in Unix in Part 7 of this series.

Part of the reason Vim is thought of as a toy or relic by a lot of programmers used to GUI-based IDEs is its being seen as just a tool for editing files on servers, rather than a very capable editing component for the shell in its own right. Its own built-in features being so composable with external tools on Unix-friendly systems makes it into a text editing powerhouse that sometimes surprises even experienced users.